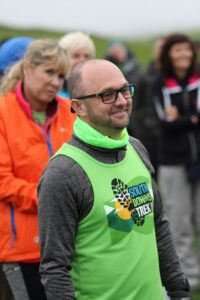 It was an early start as I had to be at Northbrook College (next to St Barnabas House) at 7am in order to register and to receive the safety briefing.

Clare, our gardener and three of her friends were also taking part and they kindly gave me a lift down. Following the briefing we got into coaches and drove to Devil’s Dyke, where the weather took a turn for the worse! 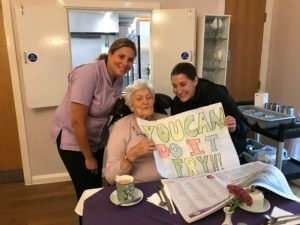 Having completed a warm up session we were encouraged to start when we liked – as it was very windy and it had just started to rain you can imagine the level of eagerness!!

I had completed a couple of ten mile training runs in the weeks before the event and it was over this familiar course I headed off with the other runners.

Although the weather wasn’t the nicest I love running in such beautiful countryside and as  I got to Truleigh Hill I  negotiated a tricky downhill – I was thrilled to see Zoe & Emma waiting for me at the bottom, Emma was holding a banner that the staff and residents had made. It was just the boost I needed and after a hug from the ladies I carried on over the road and picked up the South Downs Way path again – only to find three good friends had also arranged to combine a walk  and supporting at the same time – thank again to Mike, Sarah and Sherlock!

At this point I believe I was in 2nd or 3rd position overall but my goal was just to finish rather than a position. The route made it’s way past St Botolphs church and then uphill where I said good morning to the pigs and had a quick change into a dry top and put my waterproof jacket on as the weather really deteriorated. I made a mental note to get glasses with wipers on should I do anything like this again! 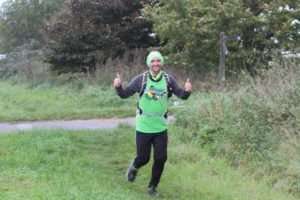 Along the next part of the route passing the Chanctonbury ring to Washington I encountered several groups of Scouts walking in the opposite direction they all seemed in very good spirits as they had the wind on their backs! As I came into Washington Zoe was waiting for me again and I had another quick change (socks this time) in the village hall which represented just over half way. I waved goodbye to Zoe and entered the part of the route that I hadn’t trained on – New territory.

At this stage I was walking all the uphills but as the weather had settled down a bit and the scenery, although unfamiliar was just as beautiful I really didn’t mind.

The route was clearly marked at all turns but there was one point in  Angmering Park I stopped as I was confronted with a sign telling me to go into a field that was apparently inhabited by a bull!!! – having checked the field was clear I continued onward! I hadn’t seen another sole for a while and so when I went through the next check point I had to brief chat to the marshals.

The final stages involved going up Highdown Hill which is familiar territory for me but I was greeted at the top by Zoe’s brother, sister-in-law and their children which again was such a lovely thing for them to do – spurred on by this and the sight of St Barnabas in the distance I pushed on and finished in 4 1/2 hours – job done! – Zoe was there to greet me and to tell me I had finished 4th!!! 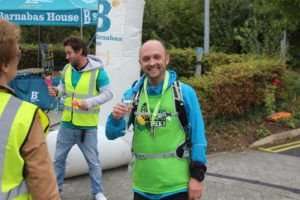 I had a lot of time by myself during the run and I thought a lot about the amazing care that St Barnabas provide and how with everyone’s generosity it will ensure they can continue to be there for those that most need them.

A very sincere thank you to everyone who sponsored me and to those that supported me on the day.