The manor has had some distinguished guests in its history. Churchill is reputed to have dined here and one of the earliest visitors is said to have been King Charles II. A plaque in the study reads:-

“Valerie Manor was once the home of a Mr Backshall during the famous flight of King Charles II, when he rode over the Sussex Downs on 14th October, 1651, after the defeat of the royal forces at Worcester. On that memorable day he (King Charles) and his faithful escort rode from the Hampshire border to Brighthelmstone (Brighton) a distance of over 60 miles with exciting adventures…. The forethought of Lord Wilmot had provided some refreshment in Beeding, the adjoining village at the house of a Mr Backshall. This house is still standing and has recently been restored with much care. Parts of it may be of a later date than 1651, but much of its exterior and interior is surely very old. The King and his two remaining companions again took to the Downs…. On the following morning he escaped from Shoreham harbour to Fecamp in Normandy in the little collier vessel of Captain Tettersell, named the Surprise…” 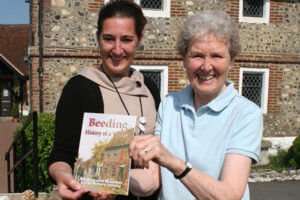