Warning: count(): Parameter must be an array or an object that implements Countable in /home/customer/www/valeriemanor.co.uk/public_html/wp-includes/post-template.php on line 319

Amy Performs for Us….. 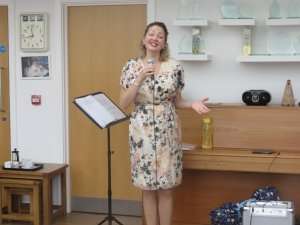 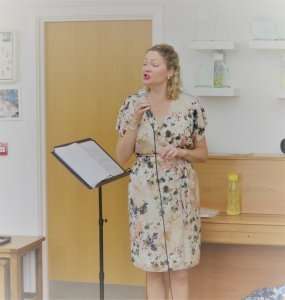 On the 26th October, one of our regular entertainers, Amy performed for us with her hits from the musicals.

Amy has visited us at Valerie Manor for a long time and the residents and staff really enjoy the variety of songs she sings – so much so that we have booked her up until December 2020!

Hello, sorry this October Blog is late but the family have just returned from a lovely week in Polperro, Cornwall.

We had a great time although it is the first year in 20 that we had such bad weather…..John found a nail in one of our tyres on the Thursday before we were due to travel on the Friday so we could not start our journey until that was fixed on Friday morning…..a lovely local chap from Steyning who comes to you to sort the problem.  Thoroughly recommended we have used him a couple of times.  It took John and I eight hours to reach Plymouth on the Friday evening where we stay overnight to have a meal and carry on to Polperro the following day to meet the family.

On our last night in Polperro the wind was Force 6 gusting 9…..absolutely frightening but spectacular!

I mentioned to the lovely lady in the local shop about it being the worst weather we had experienced…..her reply was….’have you a log burner? Have you a sea view?  In answering yes to both questions she just said….’well that is Cornwall’ ….and she was right….it was October after all!

Back to the Manor….After exercising we usually play some requested music…..Jim Reeves, Doris Day and Ella Fitzgerald were among the suggestions.  One gentleman requested The Last Night of the Proms…no sooner said than done John was on the case and ordered it for the following week which was thoroughly enjoyed.

We enjoyed ‘Rhyming Slang’….again lots of fun guessing the answers……memories of a grandad of one of our Carers who used to use the Rhyming Slang was great….we then got talking about Dick Van Dyke and his  rendition of a Londoner in Mary Poppins.

As I have mentioned before it is lovely when a family member is visiting and joins in the Reminiscence Session.

One Resident was telling us about being at the BBC (may have mentioned this before)  but much more information came about….his son was visiting and told us about two tunes his father had written.

He said that on his next visit he would bring in a CD that had been converted from a reel to reel tape recorder (remember them?…I still have one!)  he brought in the CDs and we played them….the tunes were called….’Runaway Bells’ and ‘Tango Sylvanna’  his father did not know this was going to happen and his face was an absolute picture of delight when he heard his music!  We then found out that both tunes were recorded on 19/12/74 in Mono and Transmitted by the BBC  Orchestra in Stereo on 3/1/75 and the music was arranged by a G. French and the Conductor was Frank Chacksfield.

I hope I have all the details correctly gathered as I tend to write as the Reminiscences flow!

I then mentioned having found a Ticket for an 11th Annual Display by the Beryl Peters School of Dance at the Wimbledon Town Hall on Wednesday 11th May 1961 at 7.15….ticket price 4/6 (I was performing!)  Our lovely gentleman then told us that he had performed at the venue with the Wimbledon Lyric Players!

One Resident requested,  during a Residents Meeting, a DVD Film showing on Sunday afternoons…..we have lots at the Manor please take a look in the Library to see if there is a film that your relative would like to see and let us know.  We do ask for Film requests but have not had many takers so far.

That is all for now….am looking at the beautiful autumn colours as I am writing this. 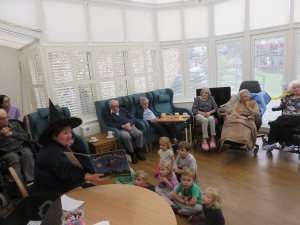 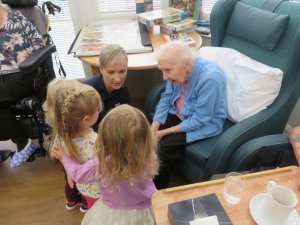 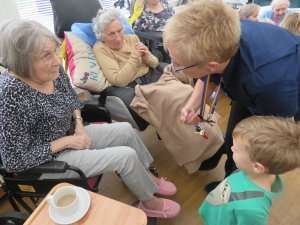 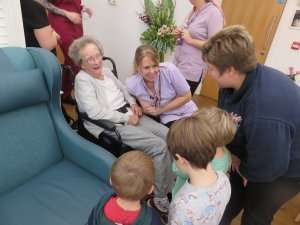 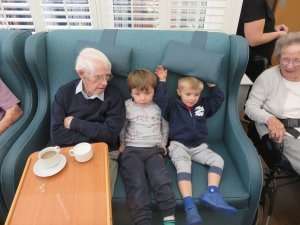 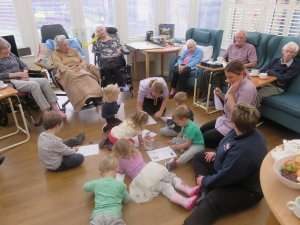 We were incredibly lucky to be contacted by Elan Nursery in Steyning to ask if they could visit with some of the children bringing old and young together. What a very special morning! The children were accompanied by two of the staff and we enjoyed some singing, games and drawing with the residents. Lots of chatting as well as you can see which was lovely! The chef made milkshakes for everyone and we enjoyed fruit and biscuits together! The children then presented the residents with pictures they had drawn during the morning! Thank you again to the staff and children for brightening up our residents day!

Elan Nursery sent us a copy of their newsletter which mentions their visit. Newsletter